As the best child custody lawyers in Chandler AZ, we often get asked, “what are grandparents’ rights in Arizona?” This is an issue that a lot of people come to me and ask about and it’s a little unsure on where Chandler Arizona statutes are as far as grandparent rights. Well, let me tell you a story. A young grandma grandpa came into my office, they were probably late forties, early fifties and they had some concerns about their grandchild. This child had been living with them throughout the child’s life, about seven years, and the child’s parents had gotten a divorce a few years before. The reason for their divorce was the mother had been involved in some criminal activities and had been arrested and was no longer able to be around the minor child and the father had continued to live with grandma and grandpa and had taken care of this child but really had left the parenting responsibilities up to grandma and grandpa, and the child had been essentially raised by his grandparents, These grandparents wanted visitation rights in Arizona and hired us to be their Grandparents rights attorney in Chandler Arizona.

Well, the father decided that he wanted to move out of the state and kind of had a falling out with his parents, and so father took the child and moved out of state, and my clients, those with grandparents rights, had talked to a different attorney in Chandler AZ who had told them there was nothing they could do. They’d found out that the mother had filed something taking them back to court and they had just had a hearing the week before, and they came to me and said: “Hey, what’s going on here? You know- we’ve been involved in the child’s life, he’s been gone for about four months, we don’t know where they’re at, they’re out of state. We don’t know. Now we find out the mother who’s a criminal, who has got some criminal history, is now seeking rights and we want to protect this child.” So they came to me and they asked me: “What can we do?” and I said, “Well, the advice you got was bad. I wouldn’t have done it that way. I would have done it a little differently, but let’s get in there right now and file something.” So we filed to intervene as grandparents, and since they had already had the hearing, we had asked for a new hearing. 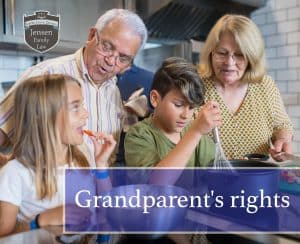 Well, because my clients came to me and were able to talk about it and understand how third-party grandparent rights work in Arizona, we were able to convince a judge to put things back to where they should be, also ensuring that the child had a relationship with his father, had a relationship with his mother and had a relationship with the other people who are important in his life, but that he primarily resided with his grandma and grandpa and they were able to make the decisions. There are a lot of complicated issues in this kind of case where you’re dealing with third-party rights or grandparent rights, and it’s important to talk to a lawyer who understands how the law works and who will give you your options so that you and your lawyer together, can make the decisions. Come and see me, we’re here at Jensen Family Law in Chandler AZ and we’ll sit down with you, we’ll take time to understand your situation and to explain the laws that would apply to you.

Jensen Family Law in Chandler AZ is located at 333 N Dobson Rd #5, Chandler, AZ 85224. We are located on the North East corner of W. Chandler Blvd and Dobson.

We are open from 9 AM to 5 PM Monday – Friday for in-person appointments.